Three songs 'Get Back To Radio', 'Molly's Song' and 'Going To Live In LA' didn't make it to the final album. But the songs can be heard on the single releases. 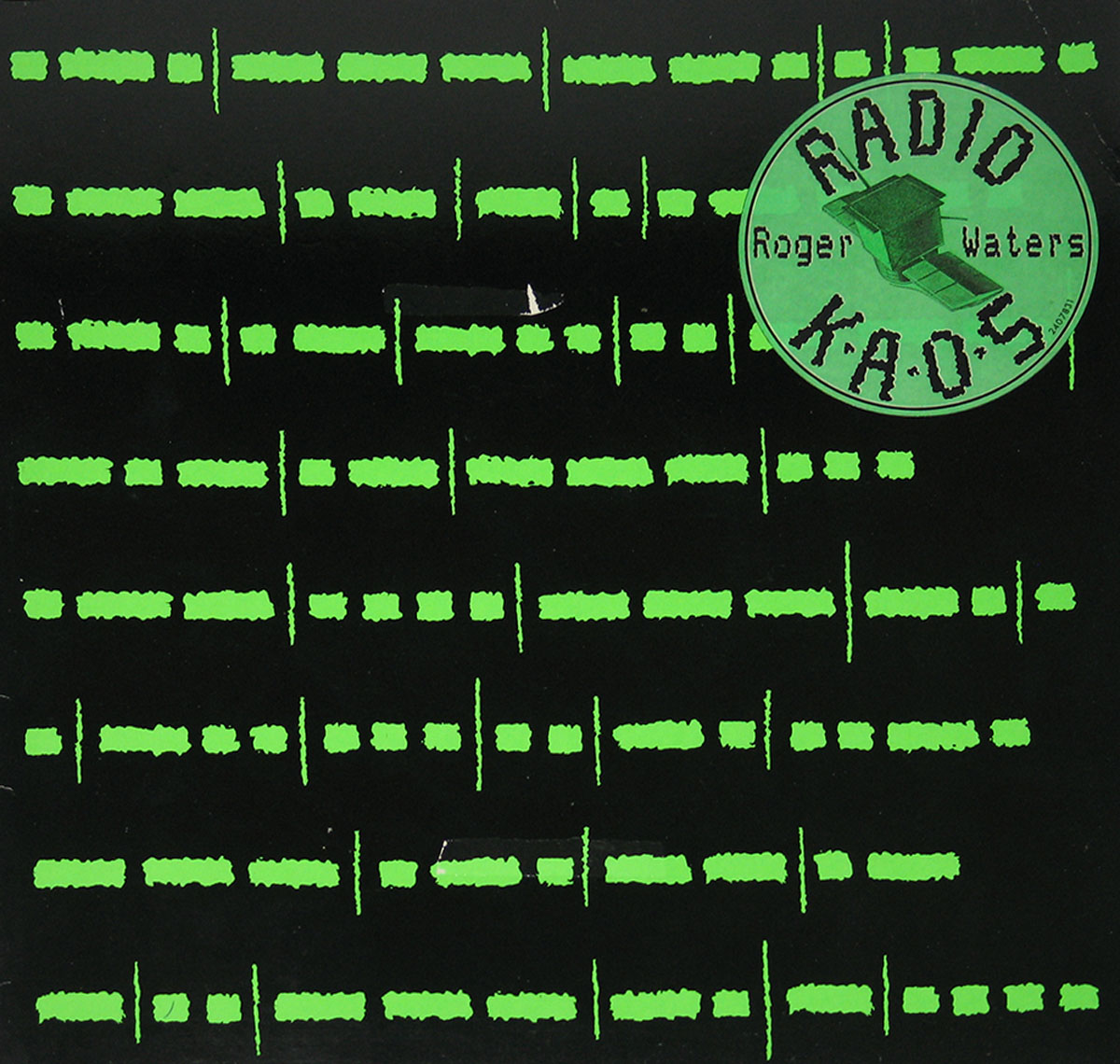 Special thanks to...
Carolyne, Peter Rudge, Andy og Lynda Quigley, Chris Elmore and Mr. Butcher fot their constant support, Nick Griffiths for all his work pre-production, and Pat "Paraquat" Kelly, Cynthia Fox and all the ex-KMET staff for 'the fish report with a beat'.

This album is dedicated to all those who find themselves at the violent end of monetarism.

Following is from the sleeve notes:

Benny is a Welsh coal miner. He is a radio ham. He is 23 years old, married to Molly. They have a son, young Ben, aged 4, and a new baby. They look after Benny's twin brother Billy, who is apparently a vegetable. The mine is closed by the market forces. The Male Voice Choir stops singing, the village is dying.

One night Benny takes Billy on a pub crawl. Drunk in a brightly-lit shopping mall, Benny vents his anger on a shop window full of multiple TV images of Margaret Thatcher's mocking condescension. In defiance, he steals a cordless 'phone. Later that night, Benny cavorts dangerously on the parapet of a motorway footbridge, in theatrical protest at the tabloid press. That same night, a cab driver is killed by a concrete block dropped off a similar bridge. The police come to question Benny; he hides the cordless 'phone under the cushion of Billy's wheelchair.

Billy is different, he can receive radio waves directly without the aid of a tuner; he explores the cordless 'phone, recognizing its radioness. Benny is sent to prison. Billy feels as if half of him has been cut off. He misses Benny's nightly conversations with radio hams in foreign parts. Molly, unable to cope, sends Billy to stay with his Great Uncle David, who had emigrated to the USA during the war. Much as Billy likes Uncle David and the sunshine and all the new radio in LA, he cannot adjust to the cultural upheaval and the loss of Benny, who for him is 'home'.

Uncle David, now an old man, is haunted by having worked on the Manhattan project during World War II, designing the Atom Bomb, and seeks to atone. He also is a radio ham; he often talks to other hams about the Black Hills of his youth, the Male Voice Choir, about home. He is saddened by the use of telecommunication to trivialise important issues, the soap opera of state. However, Live Aid has decynicised him to an extent. Billy listens to David and hears the truth the old man speaks.

Billy experiments with his cordless 'phone, he learns to make calls. He accesses computers and speech synthesizers, he learns to speak. Billy makes contact with Jim a DJ at Radio KAOS, a renegade rock station fighting a lone rear guard action against format radio. Billy and Jim become radio friends, Reagan and Thatcher bomb Lybia. Billy perceives this as an act of political "entertainment" fireworks to focus attention away from problems at "home".

Billy has developed his expertise with the cordless 'phone to the point where he can now control the most powerful computers in the world. He plans an "entertainment" of his own. He simulates nuclear attack everywhere, but de-activates the military capability of "the powers that be" to retaliate. In extremes perceptions change, Panic, comedy, compassion. In a SAC bunker a soldier in a white cravat turns a key to launch the counter attack. Nothing happens; impotently he kicks the console, hurting his foot. He watches the approaching blips on the radar screen. As impact approaches, he thinks of his wife and kids, he puts his fingers in his ears.

Silence. White out. Black out. Lights out. It didn't happen, we're still alive. Billy has drained the earth of power to create his illusion. All over the dark side of the earth, candles are lit. In the pub in Billy's home village in Wales one man starts to sing; the other men join in. The tide is turning.
Billy is home.

Jim: This is K.A.O.S. You and I are listening to KAOS in
Los Angeles. Let's go to the telephones now and
take a reradio wavesuest.
Billy: Hello, I'm Billy.
Jim: Yes?
Billy: I hear radio waves in my head.
Jim: You hear radio waves in your head? Ah! Is there
a request that you have tonight for KAOS?

Magic billy in his wheel chair
is picking up all this stuff in the air
Billy is face to face with outer space
Messages from distant stars
The local police calling all cars, radio waves

Jim: Alright, that's a song called Radio Waves.
You're listening to KAOS in Los Angeles and
we've got Billy on the line.
Billy: I'm from the valleys.
Jim: You're from the valley?
Billy: No, Jim you schmuck, the Valleys;
male voice choirs, Wales.
Jim: Ah, you're from Wales! Now is this sperm or blue-tip?
Billy: Ha, ha, ha, ha. Very funny Jim.
Jim: Sorry.
Billy: Me and Benny went out.
Jim: Who's Benny?

Jim: Um (Lights a cigarette) So your brother is in jail?

You wake up in the morning, get something for the pot
Wonder why the sun makes the rocks feel hot
Draw on the walls, eat, get laid
Back in the good old days

Then some damn fool invents the wheel
Listen to the whitewalls squeal
You spend all day looking for a parking spot
Nothing for the heart, nothing for the pot

Benny turned the dial on his Short Wave radio
Oh how he wanted to talk to the people
He wanted his own show
Tune in Moscow, tune in New York
Listen to the Welsh kid talk
Communicating like in the good old days

Benny turned the dial on his Short Wave radio
He wanted to talk to the people
He wanted his own show
Tune in Moscow, tune in New York
Listen to the Welsh kid talk
Communicating like in the good old days

Benny turned the dial on his Short Wave radio
He wanted to talk to the people
He wanted his own show
Tune in Moscow, tune in New York
Listen to the Welsh kid talk
Just like in the good old days
The good old days

Radio announcer: Do you really think Iranian terrorists
would have taken American hostage if Ronald Reagen
were president?
Do you really think the Russians would have invaded
Afghanistan if Ronald Reagan were president?
Do you really think third-rate military dictators would
laugh at America and burn our flag in contempt if
Ronald Reagan were president?
Concerned Citizen: Well it might work!
Hostage: We as a group do most importantly want to
beseech president Reagan and our fellow Americans to
refrain from any form of military or violent means as
an attempt, no matter how noble or heroic, to secure
our freedom.
Concerned Citizen: Sure! Only it's going to be mighty
dangerous for you, Cassidy

Hoppys faithful sidekick: guess you don't know
Hopalong Cassidy, Mister. Adventure's his bread,
excitement's his butter and danger, why to him that's
like strawberry jam to top it off.


THE POWERS THAT BE

Jim: This is some live rock and roll at KAOS, where
rock and roll comes out of chaos and a song called
"The Powers That Be"...

Paraquat Kelly: Bull heads, three red snapper, one pink
snapper and your Pacific coastal trench
housemonster fish.
Cynthia Fox: Ohhh! At Sky David's juke joint of joy
reports, forty under the console giggle stick ling
cod, twenty-three purple perches four sledge-
hammerhead sharks, and what a surprise,
eightyfour crabs, and no red snapper.
Paraquat Kelly: Hey and that'll do for the triumphant
return of the fish report with a beat.
Jim: We think of it as mainstreet, but to the rest of
the country it's Sunset Strip. You're listening to
KAOS in Los Angeles.

I like staying with my Uncle Dave
and I like playing with his great dane
but I don't fit
I feel alien and strange. Kinda outa range

And I sit in the canyon with my back to the sea
There's a blood red dragon on a field of green
Calling me back
Back to the Black Hills again
Ooh, ooh, Billy come home

Billy taps out Jim's number on the phone
Sits shaking as he waits for Jim's answering tone
Come on my friend, speak to me please
The land of my fathers is calling to me
And I sit in the canyon with my back to the sea
There's a blood red dragon on a field of green
Calling me back, back to the Black Hills again
Ooh, ooh, Billy come home
Come on home

He sits in the canyon with his back to the sea
Sees a blood red dragon on a field of green
He hears a male voice choir singing Billy come home
Billy, Billy, come home
Come on home

Will you stand, will you stand for it
Will you hear, ohhh!, Ohh! when the lion within you roars

Billy: Four minutes and counting.
Jim: O.K.
Billy: They pressed the button, Jim.
Jim: They pressed the button Billy, what button?
Billy: the big red one.
Jim: You mean THE button?
Billy: Goodbey Jim.
Jim: Goodbey! Oh yes. this ain't au revoir,
it's goodbey! Ha Ha!
This is KAOS. It's a beautiful, balmy,
southern California summer day.
It's 80 degrees... I said balmy... I could say
bomby... Ha! Ha!... O.K. I'm Jim and this is
Radio KAOS and with only four minutes
left to us, let's use this as wisely as possible.
Molly: Everybody got someone they call home.
Jim: Out at Dodger Stadium. It's the bottom of the
seventh, the Dodgers are leading three to
nothing over the Giants, and for those of you
who are looking to go surfing tomorrow, too
bad.
('Phone rings.)
Jim: I'm kinda lost in here to tell you the truth...
O.K. good. Ladies and gentlemen, if the reports
that we are getting are correct, this could be it.
Billy if you're listening to me, please call now.

THE TIDE IS TURNING (after live aid)

I used to think the world was flat
Rarely threw my hat into the crowd
I felt I had used up my quota of yearning
Used to look in on the children at night
In the glow of their Donald Duck light
And frighten myself with the thought of my little ones
Burning
But oh, oh, oh, the tide is turning
The tide is turning