To Kill The Child / Leaving Beirut

These two songs are both written in 2004 as a response to the war in Iraq and other inceidents. They are the first new songs from Roger Waters since the release of Flickering Flame.

The two songs were from the start only available for purchase through the official download partners of Sony Music. In December the will be released on a Japanese limited edition CD-single. More information, including interview with Roger Waters, on his official website: www.roger-waters.com 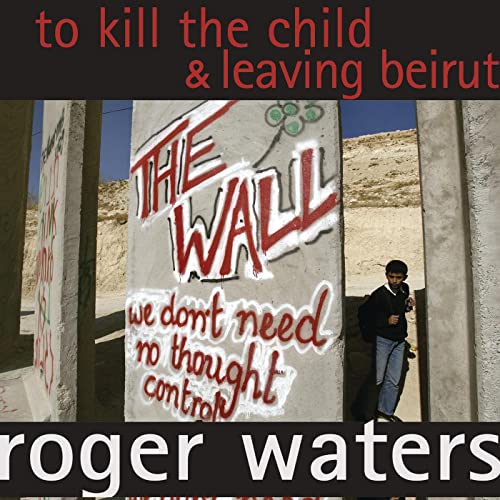 To Kill The Child

It's cold in the desert
And the space is too big
The rope is too short
And the walls are too thick
I will show you no weakness
I will mock you in song
Berate and deride you
Belittle and chide you
Beat you with sticks
And bulldoze your home
You can watch my triumphant procession to Rome
Best seat in the house
Up there on the cross
Is it anger or envy, profit or loss
That we would choose to kill the child
That we would choose to kill the child

So we left Beirut Willa and I
He headed East to Baghdad and the rest of it
I set out North
I walked the five or six miles to the last of the street lamps
And hunkered in the curb side dusk Holding out my thumb
In no great hope at the ramshackle procession of home bound traffic
Success!
An ancient Mercedes 'dolmus'
The ubiquitous, Arab, shared taxi drew up
I turned out my pockets and shrugged at the driver
"J'ai pas de l'argent"
"Venez!" A soft voice from the back seat
The driver lent wearily across and pushed open the back door
I stooped to look inside at the two men there
One besuited, bespectacled, moustached, irritated, distant, late
The other, the one who had spoken,
Frail, fifty five-ish, bald, sallow, in a short sleeved pale blue cotton shirt
With one biro in the breast pocket
A clerk maybe, slightly sunken in the seat
"Venez!" He said again, and smiled
"Mais j'ai pas de l'argent"
"Oui, Oui, d'accord, Venez!"

Are these the people that we should bomb
Are we so sure they mean us harm
Is this our pleasure, punishment or crime
Is this a mountain that we really want to climb
The road is hard, hard and long
Put down that two by four
This man would never turn you from his door
Oh George! Oh George!
That Texas education must have fucked you up when you were very small

He beckoned with a small arthritic motion of his hand
Fingers together like a child waving goodbye
The driver put my old Hofner guitar in the boot with my rucksack
And off we went
"Vous etes Francais, monsieur?"
"Non, Anglais"
"Ah! Anglais"
"Est-ce que vous parlais Anglais, Monsieur?"
"Non, je regrette"
And so on In small talk between strangers, his French alien but correct
Mine halting but eager to please
A lift, after all, is a lift
Late moustache left us brusquely
And some miles later the dolmus slowed at a crossroads lit by a single lightbulb
Swung through a U-turn and stopped in a cloud of dust
I opened the door and got out
But my benefactor made no move to follow
The driver dumped my guitar and rucksack at my feet
And waving away my thanks returned to the boot
Only to reappear with a pair of alloy crutches
Which he leaned against the rear wing of the Mercedes.
He reached into the car and lifted my companion out
Only one leg, the second trouser leg neatly pinned beneath a vacant hip
"Monsieur, si vous voulez, ca sera un honneur pour nous Si vous venez avec moi a la maison pour manger avec ma femme"

When I was 17 my mother, bless her heart, fulfilled my summer dream
She handed me the keys to the car
We motored down to Paris, fuelled with Dexedrine and booze
Got bust in Antibes by the cops
And fleeced in Naples by the wops
But everyone was kind to us, we were the English dudes
Our dads had helped them win the war
When we all knew what we were fighting for
But now an Englishman abroad is just a US stooge
The bulldog is a poodle snapping round the scoundrel's last refuge

"Ma femme", thank God! Monopod but not queer
The taxi drove off leaving us in the dim light of the swinging bulb
No building in sight
What the hell
"Merci monsieur"
"Bon, Venez!"
His face creased in pleasure, he set off in front of me
Swinging his leg between the crutches with agonising care
Up the dusty side road into the darkness
After half an hour we'd gone maybe half a mile
When on the right I made out the low profile of a building
He called out in Arabic to announce our arrival
And after some scuffling inside a lamp was lit
And the changing angle of light in the wide crack under the door
Signalled the approach of someone within
The door creaked open and there, holding a biblical looking oil lamp
Stood a squat, moustached woman, stooped smiling up at us
She stood aside to let us in and as she turned
I saw the reason for her stoop
She carried on her back a shocking hump
I nodded and smiled back at her in greeting, fighting for control
The gentleness between the one-legged man and his monstrous wife
Almost too much for me

Is gentleness too much for us
Should gentleness be filed along with empathy
We feel for someone else's child
Every time a smart bomb does its sums and gets it wrong
Someone else's child dies and equities in defence rise
America, America, please hear us when we call
You got hip-hop, be-bop, hustle and bustle
You got Atticus Finch
You got Jane Russell
You got freedom of speech
You got great beaches, wildernesses and malls
Don't let the might, the Christian right, fuck it all up
For you and the rest of the world

They talked excitedly
She went to take his crutches in routine of care
He chiding, gestured
We have a guest
She embarrassed by her faux pas
Took my things and laid them gently in the corner
"Du the?"
We sat on meagre cushions in one corner of the single room
The floor was earth packed hard and by one wall a raised platform
Some six foot by four covered by a simple sheet, the bed
The hunchback busied herself with small copper pots over an open hearth
And brought us tea, hot and sweet
And so to dinner
Flat, unleavened bread, + thin
Cooked in an iron skillet over the open hearth
Then folded and dipped into the soft insides of female sea urchins
My hostess did not eat, I ate her dinner
She would hear of nothing else, I was their guest
And then she retired behind a curtain
And left the men to sit drinking thimbles full of Arak
Carefully poured from a small bottle with a faded label
Soon she reappeared, radiant
Carrying in her arms their pride and joy, their child.
I'd never seen a squint like that
So severe that as one eye looked out the other disappeared behind its nose

Not in my name, Tony, you great war leader you
Terror is still terror, whosoever gets to frame the rules
History's not written by the vanquished or the damned
Now we are Genghis Khan, Lucretia Borghia, Son of Sam
In 1961 they took this child into their home
I wonder what became of them
In the cauldron that was Lebanon
If I could find them now, could I make amends?
How does the story end?

And so to bed, me that is, not them
Of course they slept on the floor behind a curtain
Whilst I lay awake all night on their earthen bed
Then came the dawn and then their quiet stirrings
Careful not to wake the guest
I yawned in great pretence
And took the proffered bowl of water heated up and washed
And sipped my coffee in its tiny cup
And then with much "merci-ing" and bowing and shaking of hands
We left the woman to her chores
And we men made our way back to the crossroads
The painful slowness of our progress accentuated by the brilliant morning light The dolmus duly reappeared
My host gave me one crutch and leaning on the other
Shook my hand and smiled
"Merci, monsieur," I said
"De rien"
"And merci a votre femme, elle est tres gentille"
Giving up his other crutch
He allowed himself to be folded into the back seat again
"Bon voyage, monsieur," he said
And half bowed as the taxi headed south towards the city
I turned North, my guitar over my shoulder
And the first hot gust of wind
Quickly dried the salt tears from my young cheeks.