The Pros and Cons Of Hitch Hiking


The narrator of the story is having a wild dream between 4 and 5 in the morning. He dreams about hitch hikers, terrorist, family problems, before he finally wakes up and finds everything okay. 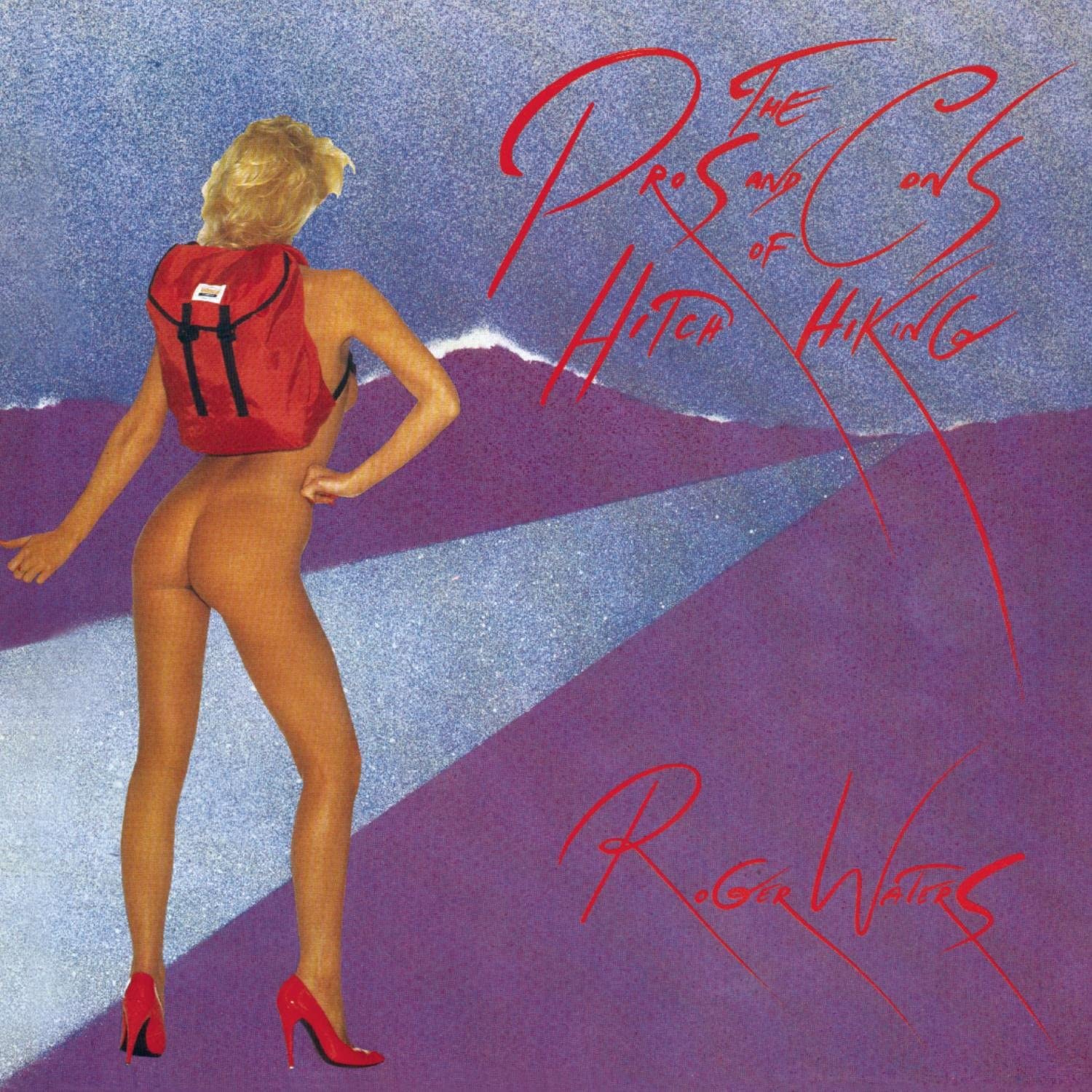 Recorded in England at Olympic, Eel Pie & The Billiard Room between February and December 1983
Mastered by Doug Sax & Mike Reese at the Mastering Lab, LA
Sleeve design by Roger Waters and Gerald Scarfe
Illustrations and Lettering by Gerald Scarfe
Photography by Alex Henderson
Co-ordination by The Artful Dodgers

4.30 AM (APPARENTLY THEY WERE TRAVELLING ABROAD)

I sneaked a quick look in the mirror
She gave me a smile
I said: Is anyone hungry?
Should we stop for a while?

So we pulled off into a layby
Her dress blew up over her head
I said: Would you like to come with me?
She said something foreign under her breath
and the sun shone down on her lovely young limbs
I thought to myself she's much to good for him
I lay down beside her with tears in my eyes
She said...

So we went for a spin in the country
to feel the wind in our hair
To feel the power of my engine
To feel the thrill of desire
And then in the trees I heard a twig snap
Warning lights flashed on my map
I opened my eyes and to my surprise...

4.37 AM (ARABS WITH KNIVES AND WEST GERMAN SKIES)

Arab: Don't cut the woman Mohamed, I want the woman.

Sleep Sleep
I know that I'm only dreaming

Thank you but.....
this young lady and I
Will just finish this bottle of wine
It was kind of you... but
I think we'll just say goodnight.

Man: "Leave us alone, could I have the key to one four three please?"
Room Clerk: There you are
Man: Thank you, goodnight
Room Clerk: Goodnight Sir!

Man: Hello yes I'd like to order breakfast please. I'd like coffee for two, and toast with marmalade. No...marmalade!

For the first time today
I held her naked body next to mine
In this hotel overlooking the Rhine
I made her mine
Ooh babe...ooh babe
Come with me and stay with me
Please stay with me

Hey...girl
Take out the dagger
and let's have a stab
at the sexual revolution

Hey girl
Let freedom for all be our rallying call
Tomorrow lets make...our new resolution
Yeah, but tonight lie still
while I plunder your sweet grave
and remember only the poor can be saved

Hey girl
Don't point your finger at me
I'm only a rat in a maze like you
and only the dead go free
So...please hold my hand
as we blunder through the maze
And remember
nothing can grow without rain

Don't point
Don't point your finger at me
I awoke in a fever
The bedclothes were all soaked in sweat
She said: "You've been having a nightmare
and it's not over yet"
Then she picked up the doggy in the window
The one with the waggly tail
And she put him to bed between two bits of bread

I just cowered in the corner
My pyjama coat over my head
And she smiles as she finished her sandwich
And her cold eyes fixed me to my dark history
as she brushed the remains
of our love from the bed
And when she had turned back the covers
when all of the prayers had been read
she said: "Come on over here you silly boy
before you catch your death of cold
I was only joking
Let's leave behind the city grime
Let's not compete
It could be fine in the country
Couldn't it though...come on let's go"
I said: "OK"

Jade: Are we going to go now?
Man: Where would you like to go, darling?
Wife: Mmm...Vermont...Wyoming(yes)
Man: Wyoming...uh huh, children!
Justin: What?
Man: We're going to Wyoming!
Wife: Darling...Which way is Wyoming?
Man: Hook at right here
Wife: You're going the wrong way! I know that, I know children...
Let's see how many...Volvos we pass on the way to our new life in the country ....One
Wife: "Jade don't do that, that's really negative"

As cars go by I cast my mind's eye
over back packs on roof racks
Beyond the horizon
where dream makers
working white plastic processors
invite the unwary
to reach for the pie in the sky
Go fishing my boy!

Man: Chapter six in which Eeyore has a birthday and gets two presents
(Man pauses to light joint)
Jade: Daddy...come on dad
Eeyore the old grey donkey stood by the side of the stream and he looked at himself in the water
'Pathetic' he said, 'That's what it is'
'Good morning Eeyore' said Pooh
'Oh' said Pooh, he thought for a long time'

(Quote from 'Winnie The Pooh' by A.A. Milne)

And so...leaving all our hopes and dreams
to the wind and the rain
Taking only our stash
Left our litter and trash
and set out on the road again
On the road again

For the first time today
I feel it's really over
You vere my everyday excuse
for playing deaf, dumb and blind
Who'd have ever thought
this was how it would end for you and me
To carry my own millstone
out of the trees
and I have to admit
I don't like it a bit
being left here beside this lonesome road

Truckdriver: Hey kid, you looking for a lift?...Get on up here. How's it going good buddy?

I nailed ducks to the wall
Kept my heart in dark ruins
I built bungalows all over the hills
Dunroamin, duncarin, dunlivin
Took my girl to the country
to sleep out under the moon
Next thing she's going crazy

Trucker: Women are like that kid
What the hell can you do?

She waits for the real Mr. Right to come
gently removing her heart
with his promises of real communication

while you were asleep

I kept you in buttons and bows

Man: Christ all those clothes

Trucker: Get movin', get off the road ya goddam faggot

Trucker: Not in my rig you don't boy...get the hell out of here

An angel on a Harley
pulls across to greet a fellow rolling stone
Puts his bike up on it's stand
Leans back and then extends
a scarred and greasy hand...he said

Angels Doll: Have a nice day

These are the pros and cons of hitch hiking

Oh babe, I must be dreaming
I'm standing on the leading edge
The Eastern seaboard spread before my eyes
"Jump" says Yoko "Oh no!
I'm too scared and too good looking" I cried
"Go on" she says
"Why don't you give it a try?
Why prolong the agony all men must die"

Joey: And mother wants you

Could you see him selling tickets
where the buzzard circles over

the body on the plain
Did you understand the music Yoko
or was it all in vain?

In truck stops and hamburger joints
In Cadillac limousines
In the company of has-beens
In bent-backs in sleeping forms
On pavement steps
In libraries and railway stations
In books and banks
In the pages of history
In suicidal cavalry attacks
I recognise...
myself in every stranger's eyes

And in wheelchairs by monuments
Under tube trains in commuter accidents
In council care and county courts
At Easter fairs in sea-side resorts
In drawing rooms and city morgues
In award winning photographs
of life rafts in the China seas
In transit camps, under arc lamps
On loading ramps
In faces blurred by rubber stamps
I recognise...
myself in every stranger's eyes

And now from where I stand
upon this hill I plundered from the pool
I look around, I search the skies
I shade my eyes, so nearly blind
and I see signs of half remembered days
I hear bells that chime in strange familiar ways
I recognise...
the hope you kindle in your eyes

Then the moment of clarity
faded like charity does
sometimes
I opened one eye
and I put out my hand just to touch your soft hair
to make sure in the darkness that you were still there
And I have to admit
I was just a little afraid, Ooooo oooh yeah
But then...
I had a little bit of luck
You were awake
I couldn't take another moment alone.